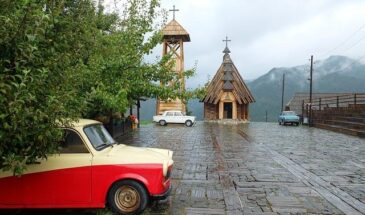 Train ride through Sargan Eight old touristic railway from 1925, a narrow-gauge railway that passes through 22 tunnels, over 5 bridges, and overcome the altitude difference of 300 meters. Lunch. Visit to ethno village Drvengrad (Wooden City), built on Mecavnik hill by Serbian film director Emir Kusturica, who won twice Palm d'Or on Cannes film festival. Pass through Ovcar-Kablar gorge with numerous monasteries dated from 14th century. Visit to WW2 Partizan gun and ammounition factory in tunnels beneath Museum dedicated to Uzice Republic that was the first liberated teritory in Europe in the middle of Nazi conqred Europe in 1941. Visit to memorial complex Kadinjaca, dedicated to WW2 partizans from this area that died in WW2. Back to Belgrade.