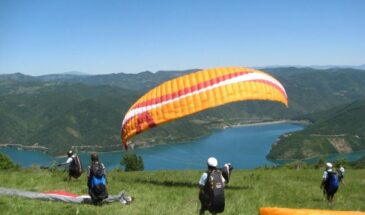 Day 2  - Drive to Sremski Karlovci, small baroque town in Vojvodina province, with sightseeing of downtown, visit to Bee-keeping Museum and wine tasting in one of the wine cellars that are very common on this area. Continue to Petrovaradin Fortress that is second biggest fortress in Europe, known as "Gibraltar on Danube", built in early 17th century. We will enter the tunnel network beneath Petrovaradin Fortress, some 500 meters of more than 20 kilometers of tunnels. Lunch in restaurant on the top of the fortress, with view to Danube River and Novi Sad City. Follows sightseeing of Novi Sad, the second biggest city in Serbia. Back to Belgrade. Dinner in fancy restaurant in Beton Hala (Concrete Hall) area, with live music band. Midnight cruise by boat on Sava and Danube River (with some champagne of course), directly from restaurant to one of the best raft-boat clubs in Belgrade, located on confluence of Sava to Danube River with perfect view to Belgrade Fortress. Overnight in 5* hotel in downtown of Belgrade.

Day 3  - Next 3 days all transfers on mountain area are by jeeps... in some parts is standard drive, in some is rough drive, depend on the terrain and what clients prefer. First to Oplenac Hill and complex of Serbian Royal Dynasty Karadjordjevic: Museum of King Peter the 1st and the Mausoleum of Serbian Royal Dynasty of Karadjordjevic in the Church of St. George. Visit  to Royal wine cellar with wine tasting. Lunch in restaurant where royal family eat. Now from royalism to communism… visit to Museum dedicated to Uzice Republic that was the first liberated teritory in Europe in the middle of Nazi conqered Europe in 1941 with WW2 Partizan gun and ammounition factory in tunnels beneath. Visit to memorial complex Kadinjaca, dedicated to WW2 partizans from this area that died in WW2. Dinner (special roasted lamb meat). Overnight in 4* SPA hotel on Zlatibor Mountain or VIP mountain house on Tara Mountain.

Day 5  - Jeep transfer to paragliding. Get the perfect view to Serbia nature during paragliding flight with professional paragliding trainers. At mountain top all guests have training with paragliding trainers (some of them are European champions), then you will do tandem paragliding flight (5-10 minutes, it depends on the wind and other weather conditions, and each guest is specific…), after the flight is organized transfer back to starting point, with open-air barbecue lunch and drinks. Back to Belgrade. Check-in at hotel in Belgrade. Slow evening drive by vintage car (Ford A 1928, Jaguar SS100 1939, Bentley R 1954…) passing bar streets, and drop to Serbian National Theatre, founded in 1868, and visit to ballet or classical opera, and go to backstage to discover what happens behind the scenes. Dinner in one of the best restaurants in Belgrade. Visit to best bars and clubs. Overnight in 5* hotel in downtown of Belgrade.

Day 6  - 2 hours of panoramic sighseeing from Cessna airplane, along Danube River from Belgrade to Romanian border. View to Viminacium archaeological site, one of the biggest Roman cities from 1st century, and biggest European archaeologic park, spread on 350 acres. View to Golubac Fortress from 14th century, one of the most beautiful medieval fortresses on the Danube River, where the Danube is widest (6,5 km). Continues flight above Djerdap Gorge, the longest (100 kilometers long) and deepest (92 meters) gorge in Europe with remains of Trajan’s Bridge (1127 meters long stone bridge that Roman Emperor Trajan built at beginning of 2nd century), and the place where he left a permanent imprint on the rock, known as Tabula Traiana. Follows the largest European 55 meters high rock sculpture depicting Decebal the last king of Dacia in early 2nd century. View to Djerdap 1 Hydroelectric Power Plant (known as the Iron Gate), built at 1970’s as the largest dam on the Danube. View to Lepenski Vir archaeological site, oldest preserved urban settlement in Europe (7000 years BC). Back to Belgrade. Departure from Belgrade. End of program.

- 5 BB accommodation in selected hotels (or selected mountain house), according to the program

- 3 days of mountain transfers, professional off-road jeeps (Toyota Land Cruiser, Mitsubishi Payero, or simular class) with Wi-Fi all the time… with included all tolls, parkings and other costs

- 6 days of services of professional experienced licenced English tour guide/ group leader, with all meals and accommodation for him included

- 3 entrances to clubs/bars with table booked, according to the program (underlined)

- Luggage handling in all hotels and from and to the airport

- Donations for churches that have free entrance